Charleston, South Carolina, is a city in Charleston County. It’s Charleston County’s county seat. It was founded in 1670, making it the state’s oldest city. Before it got its current name, it was called Charles Town to honor England’s then-ruler King Charles II. Charleston has a population of over 134,000 citizens.

Charleston, sometimes called “The Holy City,” has received many accolades from media venues like Travel + Leisure and Southern Living. They praised the city for its friendliness, rich history, and beautiful architecture. There’s so much to see and do here, so you don’t have to worry about being bored. Drayton Hall was built in the 1730s; therefore it’s the oldest unpreserved plantation house in the country. This museum is special because it’s not furnished nor was it modernized with features like air conditioning or plumbing. If you enjoy the performing arts, then you should visit the Historic Dock Street Theatre. Known as “America’s First Theatre,” this facility features musicals, plays, dance performances, and more. The South Carolina Aquarium is considered the number one family-friendly destination by locals and visitors. The aquarium is home to more than 5,000 animals, plus it has a sea turtle hospital where you can learn about and interact with the sea turtles. Waterfront Park is a small yet lovely place in which to visit. This eight-acre park possesses two fountains and a canopy of oak trees. Public schools in Charleston are operated by the Charleston County School District and the Berkeley County School District. This city also has several private schools and colleges.

The real estate in Charleston is comprised of apartments, townhomes, mobile homes, and single-family dwellings. The homes in Charleston generally have an average of three bedrooms, and most of them were constructed during the years 1970-1999. Listing prices for available Charleston properties fall in a broad range and depend on the home's location, age, size, and special features. Consider buying your first or next home in Charleston. It’s friendly, historic, and contains many entertaining attractions. If you’re interested in homes for sale in Charleston, South Carolina, please contact us today.

So rarely found, this stunning open floor plan in the highly desirable Oakhurst section of Carolina Bay is waiting for *YOU*. Uniquely located on a quiet cul-de-sac with...

Welcome to a fully renovated home with a two story addition in one of Charleston's premier neighborhoods, Country Club II. On a private cul-de-sac shared with only one ot...

Adorable, well maintained brick cottage on large corner lot. All of the bedrooms have been updated with new windows, electrical, paint, insulation and drywall. The kitc...

Welcome to 182 King George Street, a beautifully updated Daniel Island Park side custom home where every detail is designed to entertain, relax, and enjoy. From the large...

Incredible opportunity to own beautiful, specious, and completely remodeled Charleston Craftsman style home in one of the most desirable areas in downtown Charleston! Enj...

This is your chance to own a piece of history with this classic Charleston single! 40 Savage Street is a few walkable blocks away from the Battery with harbor views, the ...

Wonderfully maintained and updated brick ranch in the heart of West Ashley not to be missed! Convenient one story living. Enter an open floor plan, kitchen, dining and l...

This beautifully restored, 3-bedroom, one bath condo with a 600 sf veranda and two parking spaces (one deeded and one assigned), is in the Historic William Robb house at ...

First time on the market! energy efficient Home with upgraded since new. Eat in kitchen with stainless appliances and the living room features a fireplace with tray ceili...

Welcome home to 1320 Pooshee- located in the heart of West Ashley. This stunning home has been completely transformed from top to bottom so you can move right in. Brand n...

TONS OF CHARACTER!! This home was originally built in 1938 and radiates charm and historic appeal. It has been totally renovated and converted into a spacious single fami... 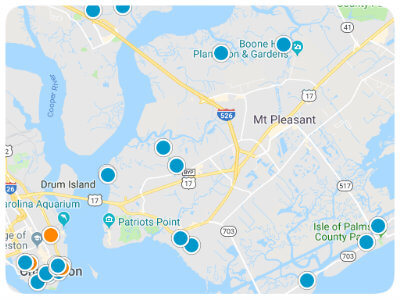